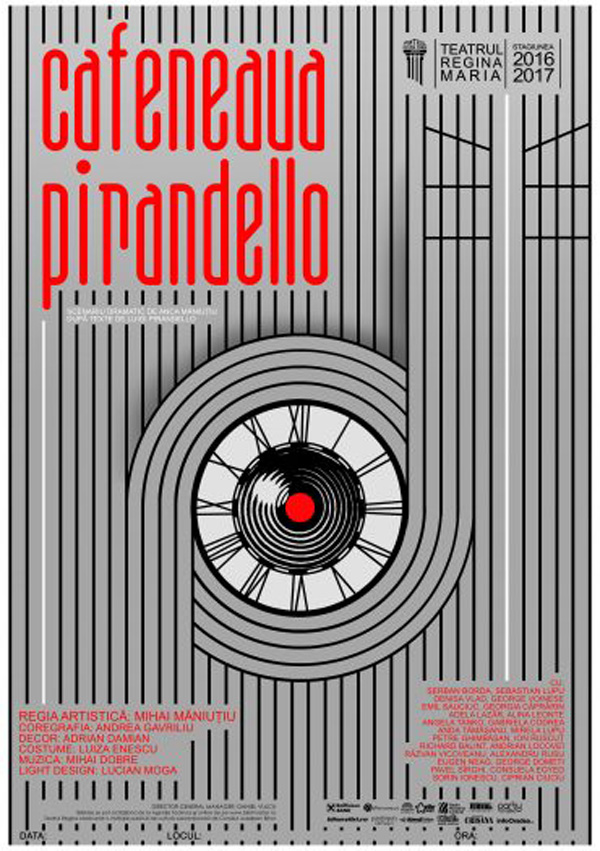 “Pirandello café” starts from the dramatic script made by Anca Măniuțiu, structured on two plays that belong to the playwright Luigi Pirandello: The man with the flower in his mouth and The mountain giants, which contains in its intertext entwining disparate lines from Six characters in search for an author and Tonight we improvise.

Pirandellian characters, spectrally designed in an abandoned late-night coffee shop, located – not unintentionally – close to the railway station, they meet and unleash an absurd world, where the boundary between dream and reality becomes fluid. In this ghostly frame, it infiltrates a group of circus artists that stimulate the atmosphere and gives the performance a comic touch. Word, in a world governed by oneiric, plays a secondary role, and music, but must of all the choreographic language assumes its illustrative dimension.

“The performance tries to catch a hallucinatory world, fantastic, governed by oneiric, where the boundary between reality and dream (or nightmare) is extremely fragile. In conceiving the script, I started from Pirandello`s obsessions, expressed in all of his dramatic writings. These refer to versatile, difficult to quantify ratios, between theatre and life, to the impossibility of fixing life – as a constant, unbridled flow – into the conventional patterns and our social masks (or in the well-defined identity of some characters). From here, questioning our own psycho-emotional identity and of reality itself, which slips from our grasp. From here, the vague psychological consistency of the characters and their fundamental inadequacy to reality. “Pirandello café” is the materialization of an emblematic metaphor and an of ancient theatrical motif: life is a dream.” Anca Măniuțiu