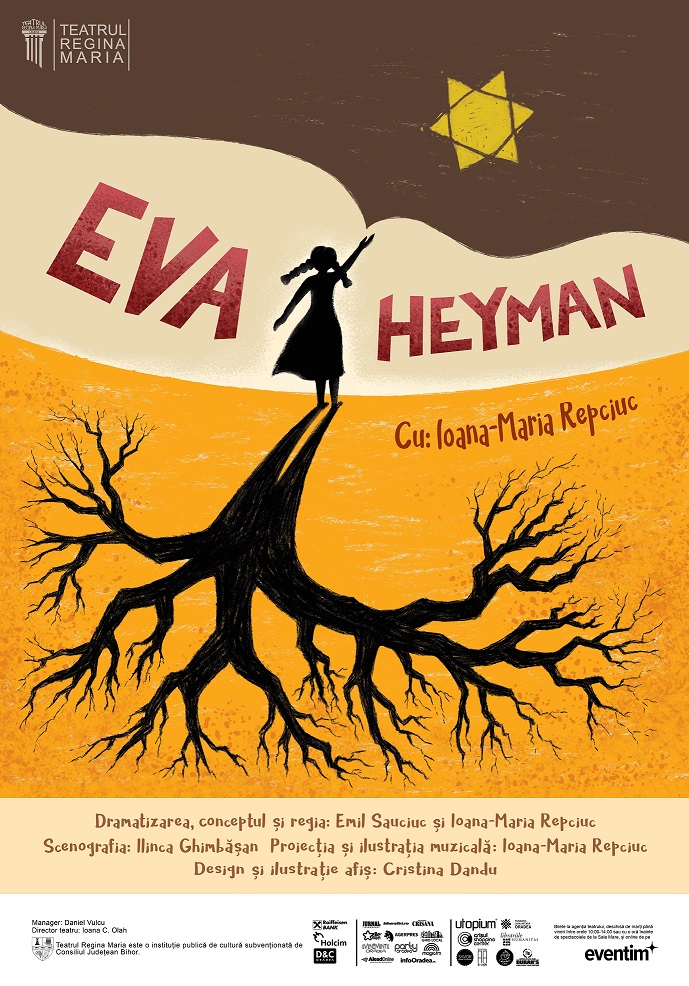 The Regina Maria Theater invites you to the premiere of the show "Eva Heyman". A shocking one-women show, based on the diary of the little Jew from Oradea, who finds her tragic end in the Auschwitz camp. The show captures Eva's events, thoughts, and feelings for a period of several months, just before she was deported. An authentic testimony about the tragedy of a child and a people!

"The dramatization is based on the diary of Eva Heyman, a 13-year-old Jewish girl who lived in Oradea during the ghettoization. So, the action takes place in Oradea in 1944, that's why I always considered that this scenic story must be born here, at her home. Eva's parents are separated. She lives with her grandparents and wants to become a photojournalist, but more and more she wants to live. He has an extraordinary appetite for life until the last moment. She is a witness when the Germans kidnap her best friend, whom she never sees again, she is a witness when the Germans enter Oradea "with cannons and tanks", she is a witness when her red bicycle, which she loves enormously, is taken from her. photographed and in fact all objects in turn. She witnesses indescribable horrors, but the desire to live never leaves her. During the show, we will witness ordinary moments in a child's life, but placed in a totally unusual context. She plays, is jealous, falls in love, and dreams a lot, even if she lives under constant threat. She's naive but extremely intelligent. He is a forced mature child, ahead of time. In the construction of the role, I relied a lot on these strong character traits of her. Eva at the age of 13 is truly a fighter. If I manage to keep my hope alive until the end, both on stage and in the hall, I think I have achieved at least part of my goal. ” (Ioana-Maria Repciuc)