THE LOVERS OF ANCONA 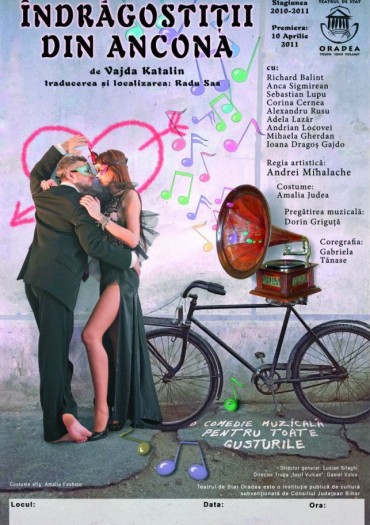 “The Lovers of Ancona” is a musical comedy, adapted by Vajda Katalin, in which all appearances are false and nothing is what it seems. The play is a musical comedy, the songs are those chosen from the ‘60’s and ‘70’s, and all heroes know how to sing, proving once again, if necessary, that the Italians are romantic and passionate. The action of the play takes place in the little town called Ancona, in an old piazza, where the togetherness of the homes and the Latin blood make keeping secrets impossible. The most important man in town is Tomao Nicomaco, a widowed Don Juan, who is no longer in his young years, but is set to conquer a young Romanian maiden, Victorița, who is visiting Ancona in order to find Giovanni, the father of her unborn child.